Ina Garten Net Worth In 2022 - The Barefoot Contessa She is best known for being the Emmy Award-winning Barefoot Contessa series host on the Food Network.

Garten has previously worked as a nuclear policy analyst for the White House. Ina was one of two children born to dietician Florence and surgeon Charles H. Rosenberg and raised in Stamford, Connecticut.

Early on, she was praised for her academic prowess and shown a high affinity for science, which she claims she still employs while experimenting with dishes.

When she was just 15 years old, she was visiting her brother at Dartmouth College when she first met her future husband, Jeffrey Garten.

After high school, she had intended to enroll at Syracuse University, but she delayed starting her schooling so that she could wed Jeffrey in 1968.

Jeffrey Garten, Ina's spouse, served as dean of the Yale School of Management from 1995 until 2005.

He regularly appears on her culinary program, helping out or trying out the food she makes.

As a Democrat registered voter, Garten has given money to the presidential campaigns of Bill Clinton, John Kerry, George H. W. Bush, and Barack Obama.

The 16th annual Hudson Peconic fundraiser for Planned Parenthood had her as the hostess.

Garten is on the East Hampton Design Review Board, a group that monitors construction permits and gives its approval to different local architectural and design components in order to promote the historic area. 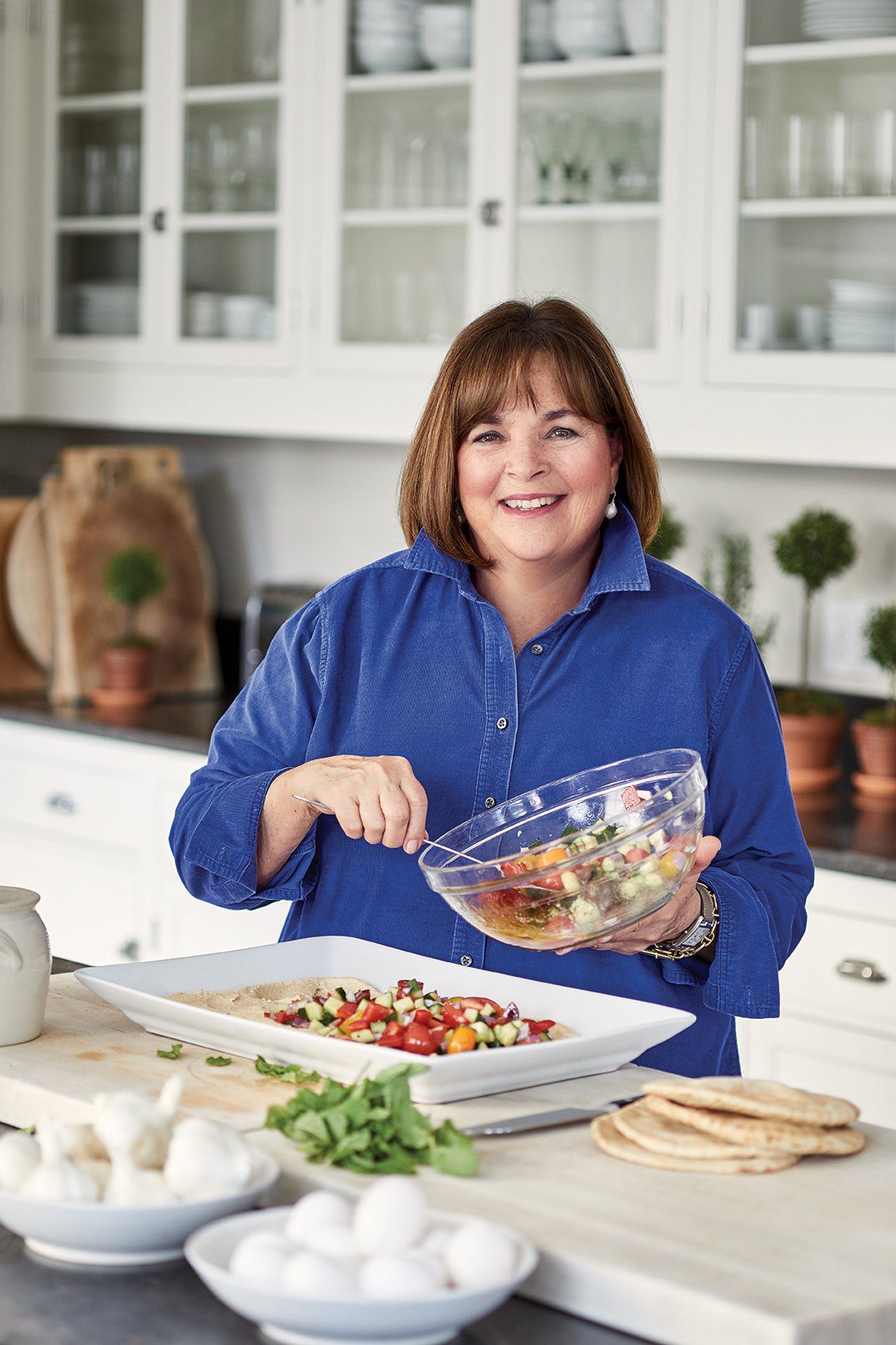 Ina Garten Cooking in her kitchen holding a bowl of veggies

Ina started dabbling in cooking and entertaining to keep herself busy while Jeffrey completed a four-year military tour during the Vietnam War after the couple shortly moved to Fort Bragg, North Carolina.

Ina obtained her pilot's license during this time.

She fell in love with French food, outdoor markets, and vegetable stalls when the pair went on a four-month camping trip in France after Jeffrey's stint in the military was over.

When they relocated to Washington, D.C. after returning to the United States in 1972, dinner gatherings there started to become a weekly ritual.

Garten was pursuing an MBA at George Washington University while working in the White House.

She started off as a government assistant and worked her way up to the post of budget analyst, where she wrote the nuclear energy budget and policy papers for Presidents Gerald Ford and Jimmy Carter.

In this period, Garten started to sell homes for a profit, and the proceeds allowed her to make her first significant acquisition, The Barefoot Contessa Speciality Store.

She made the decision to look into an advertisement in the New York Times for a specialized food business that was up for sale in the Hamptons.

She and her husband Jeffrey traveled to Long Island to see the shop, where they fell in love.

Despite having no prior experience in the industry, Garten instinctively knew that was what she wanted to pursue.

The owner contacted the next day to accept Garten's offer after she made it to her.

After buying the 400-square-foot business in 1978, she quit her position with the government, and the pair relocated to New York City.

The original proprietor of the business gave the establishment the name of the 1954 Ava Gardner movie.

When Garten took over, she preserved the name because it fit with her conception of an "elegant yet earthy lifestyle."

Within a year, Garten relocated the Barefoot Contessa to a bigger space, which it soon outgrew.

In 1985, they moved once again, this time to the wealthy Long Island community of East Hampton.

The shop increased in size by more than seven times and focused on selling regional specialties including lobster Cobb salad, locally produced cheeses, and fruits and vegetables.

As the company expanded, Garten hired more local chefs and bakers while still doing a lot of the cooking herself.

Celebrity clients like Steven Speilberg and Lauren Bacall praised her.

She sold the business to Amy Forst and Parker Hodges in 1996, who carried on Garten's traditions.

The collapse of the lease negotiations in 2004 resulted in the store's permanent closure. Ina Garten With A Book In Hands

Garten took her hand at authoring a cookbook and established herself an office above the Barefoot Contessa shop.

The reaction from readers to The Barefoot Contessa Cookbook was overwhelmingly positive, making it the most thrilling professional endeavor she had ever undertaken.

Her second book, Barefoot Contessa Parties, was released in 2001.

After the 2002 release of Barefoot Contessa Family Style, Foot Network contacted her with a proposal to host a culinary program of her own.

She repeatedly turned down their offer until the contract was handed to the London-based production firm behind Nigella Bites.

She consented to a 13-show season, and "Barefoot Contessa" made its debut to enthusiastic reviews in 2002.

Since then, the program has continued.

Her spouse, their friends, and even celebrities are often included.

The program gets some of the top ratings on the Food Network and averages one million viewers every episode.

The program has received Daytime Emmy nominations, and Garten took home the award for Best Culinary Host in 2009.

Ina Garten In Her Kitchen

Her cookbooks generate revenue for her as well.

The Barefoot Contessa Cookbook, Garten's first book, was published in 1999.

The majority of the recipes in this book are ones Garten created while working at her Barefoot Contessa shop in East Hampton, New York.

On her Barefoot Contessa website, Garten offers things for sale as well.

Numerous products are available for purchase, including hats, totes, and mugs.

Prior to discontinuing the company, Garten had her own line of sauces, frozen foods, and baking mixes.

She claims that she would rather not have her name connected to goods.

Ina and her business partner Frank Newbold introduced their own brand, Barefoot Contessa Pantry, in cooperation with Stonewall Kitchen in 2006.

Her well-known from-scratch recipes served as the foundation for the prepared delicacies.

Only upmarket gourmet and cookware stores like Crate & Barrel, Sur La Table, and Fox & Obel Market Cafe sell the lone, which is rather expensive.

Chef Garten's riches allowed her to purchase a variety of opulent homes.

A $4.65 million apartment on New York City's Upper Eastside is one of these properties.

The home is furnished and has two bedrooms, three roomy bathrooms, and a cutting-edge kitchen.

According to sources, installing the stove alone cost $15,000!

Additionally, Ina is the owner of a sizable home in the East Hamptons.

Over the years, she's driven a variety of vehicles.

Ina has been working in the food sector for many years.

She has had to adapt to a constantly changing technological environment in order to ensure the sustainability of her business.

Ina Garten has an incredible 2.1 million followers on Instagram.

She also promotes the Barefoot Contessa television series and cookbooks with this network.

On this site, she promotes book tours for "Cook like a pro."

Additionally, she had trips planned to Chicago and Dallas.

She recently shared some helpful advice on how to prepare steaks for Memorial Day.

Her tried-and-true method produced steaks that were not just thick but also flavorfully balanced.

She recently shared a sour cream coffee cake recipe with her followers.

The website mostly highlights her love of baking and food in general.

Why Ina Garten Told The Food Network To Lose Her Number

What Did Ina Garten Do Before Cooking?

Garten was in the administration before to becoming a well-known chef. Garten resided in Washington, DC, in the late 1970s and worked for the White House Office of Management and Budget.

Garten reportedly contributed to the creation of the nuclear energy budget while working for both Gerald Ford and Jimmy Carter, according to Insider.

What Type Of Food Is Ina Garten Known For?

Garten's roast chicken is well-known more than 20 years after the cookbook first hit the market. One meal contains her whole approach to cooking.

How Did Ina Garten Make Her Money?

Garten's Food Network culinary programs contribute to part of her wealth. Her cookbooks generate revenue for her as well.

The Barefoot Contessa Cookbook, Garten's first book, was published in 1999.

The majority of the recipes in this book are ones Garten created while working at her Barefoot Contessa shop in East Hampton, New York.

People often claim that the kitchen is the realm of women, yet in a restaurant kitchen, this is never the case.

She is a female celebrity chef who is among the most well-known in the world.

She goes by the name of Ina Garten and has a net worth of around $60 million.

She is a food network host with awards.