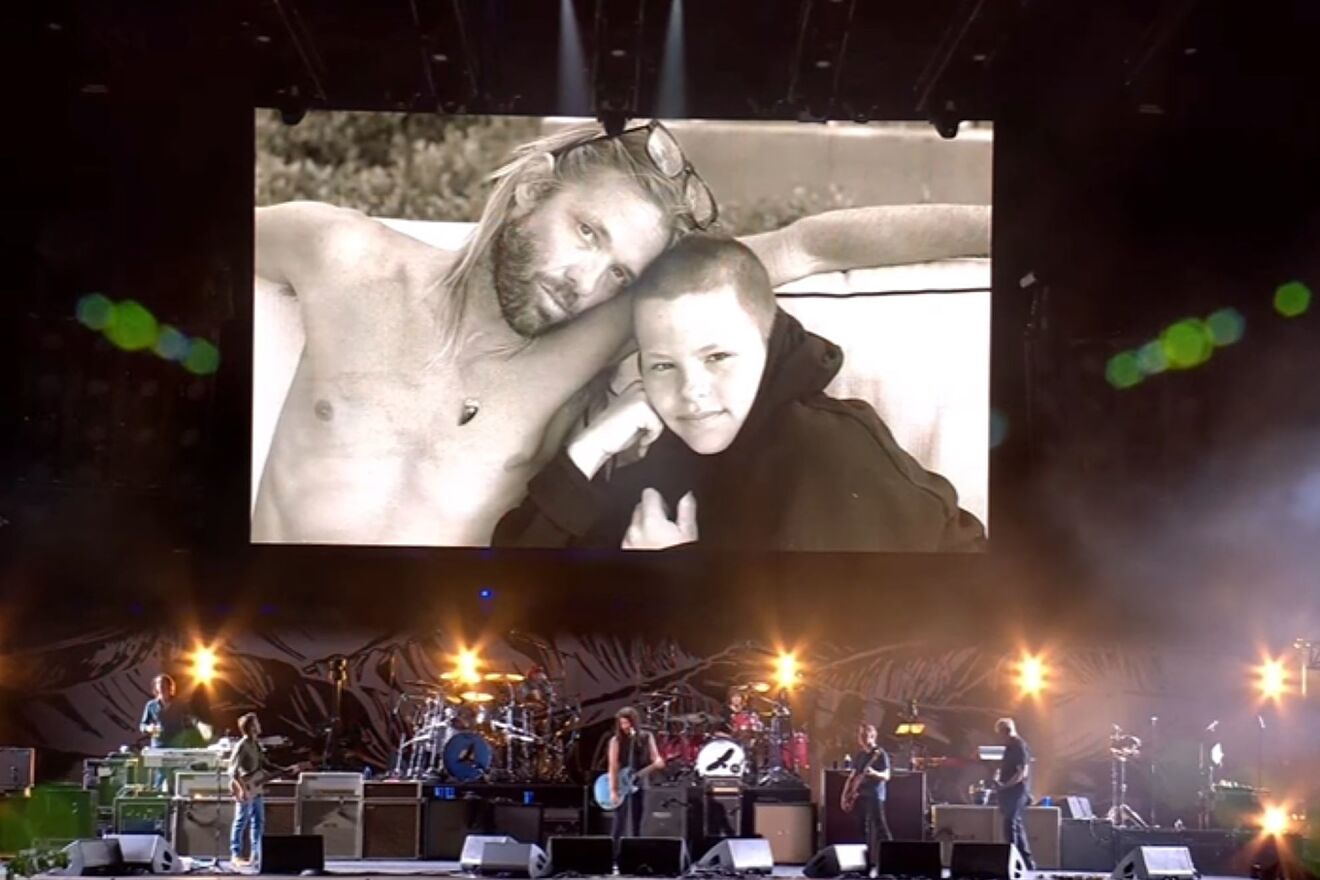 Foo Fighters paid tribute to their late drummer Taylor Hawkins on Saturday at London's Wembley Stadium. This was the first of two shows that will be held in his honor. Taylor Hawkins' son performs in dad's honor, Shane joined the band on drums for their hit song "My Hero," it was one of the best parts of the night.

The 16-year-old played with all his heart while a big screen behind him showed pictures of the two. The show was a tribute to the late drummer, who died in March at the age of 50. It started with a video montage set to the Foo Fighters song "Aurora," and then frontman Dave Grohl, along with bandmates Nate Mendel, Chris Shiflett, Pat Smear, and Rami Jaffet, went onstage to make his first public comments since Hawkins' death.

Today.com says that thousands of fans showed up at London's Wembley Stadium on Saturday for the first of two tribute concerts for the late Taylor Hawkins. Hawkins, who played drums for the band Foo Fighters, was found dead in Bogotá, Colombia, in March. He was 50 years old.

Along with dozens of famous people, like Brian May and Roger Taylor from Queen, Liam Gallagher, Mark Ronson, and Dave Chappelle, the band had a special guest: Hawkins' 16-year-old son, Shane, who played drums for the band during one of its biggest hits, "My Hero."

Shane gave a passionate performance with his father's longtime bandmates. The song ended with a drum solo as frontman Dave Grohl looked on with pride. The performance was caught on video from the livestream and shared on Twitter.

“Shane Hawkins is 16 years old, and gave the most incredible performance on drums of ‘My Hero’ at his own Dad’s tribute concert at Wembley. How on Earth did he hold it together? Surely one of the most poignant moments in rock history.”

Another fan wrote an emotional letter to the teenager, saying,

“Some unbelievably talented kids but I think Shane Hawkins just shone brightest. To be able to play at that level in front of 90,000 people at a tribute concert for your dad is another level. Incredible.”

Violet, Grohl's 16-year-old daughter, also took the stage and sang covers of "Valerie" by The Zutons and "Last Goodbye" and "Grace" by Jeff Buckley. Later that night, when Grohl and the rest of Foo Fighters played with many of the other bands, he couldn't stop crying as he sang the band's hit song "Times Like These."

Several times, people could see that he was crying. He stopped the song to get himself together before some sad lines. Taylor Hawkins died at a festival in Colombia, so Foo Fighters canceled all of their upcoming tour dates.

“We’re sorry for and share in the disappointment that we won’t be seeing another as planned. Instead, let’s take this time to grieve, to heal, to pull out loved ones close, and to appreciate all the music and memories we’ve made together.”

A few months later, Hawkins's wife, Alison, took to social media to thank fans for all the support they had shown. Alison Hawkins, who had three children with the late drummer, wrote,

"In honor of his life, it is now up to all of us who loved him most to honor his legacy and the music he gave us. Once again, thank you all for your love and care. Taylor loved you all, and so do we."

Foo Fighters announced both tributes shows on social media in June. They said that they were for "our dear friend, our badass bandmate, and our beloved brother." Alison Hawkins wrote, who shared three children with the late drummer.

“In celebration of his life, it is now up to all of us who loved him most to honor Taylor’s legacy and the music he gave us. Thank you all again for your love and sympathy. Taylor loved all of you & we love you too.”

Travis Barker, Alanis Morissette, Gene Simmons, and Wolfgang Van Halen will all be at a second tribute show on September 27 at the Kia Forum in Los Angeles.

Shane Hawkins, the 16-year-old son of the late Taylor Hawkins, peform in his dad's honor to paid tribute to his father on Saturday night with a powerful performance of "My Hero" by the Foo Fighters.

Shane Hawkins played the drums with passion, just like his father did, while Foo Fighters frontman Dave Grohl belted out the lyrics with the crowd. Before the song started, a black-and-white photo of Taylor and Shane Hawkins was shown on the screens at Wembley Stadium in London.

The show was a tribute to the elder Hawkins, who died in March while on tour with the Foo Fighters in Bogota, Colombia. He was 50 years old. The Colombian attorney general's office said that a first forensic medical exam and urine toxicology report of the musician's body found 10 substances in his system, including THC (marijuana), tricyclic antidepressants, benzodiazepines, and opioids.