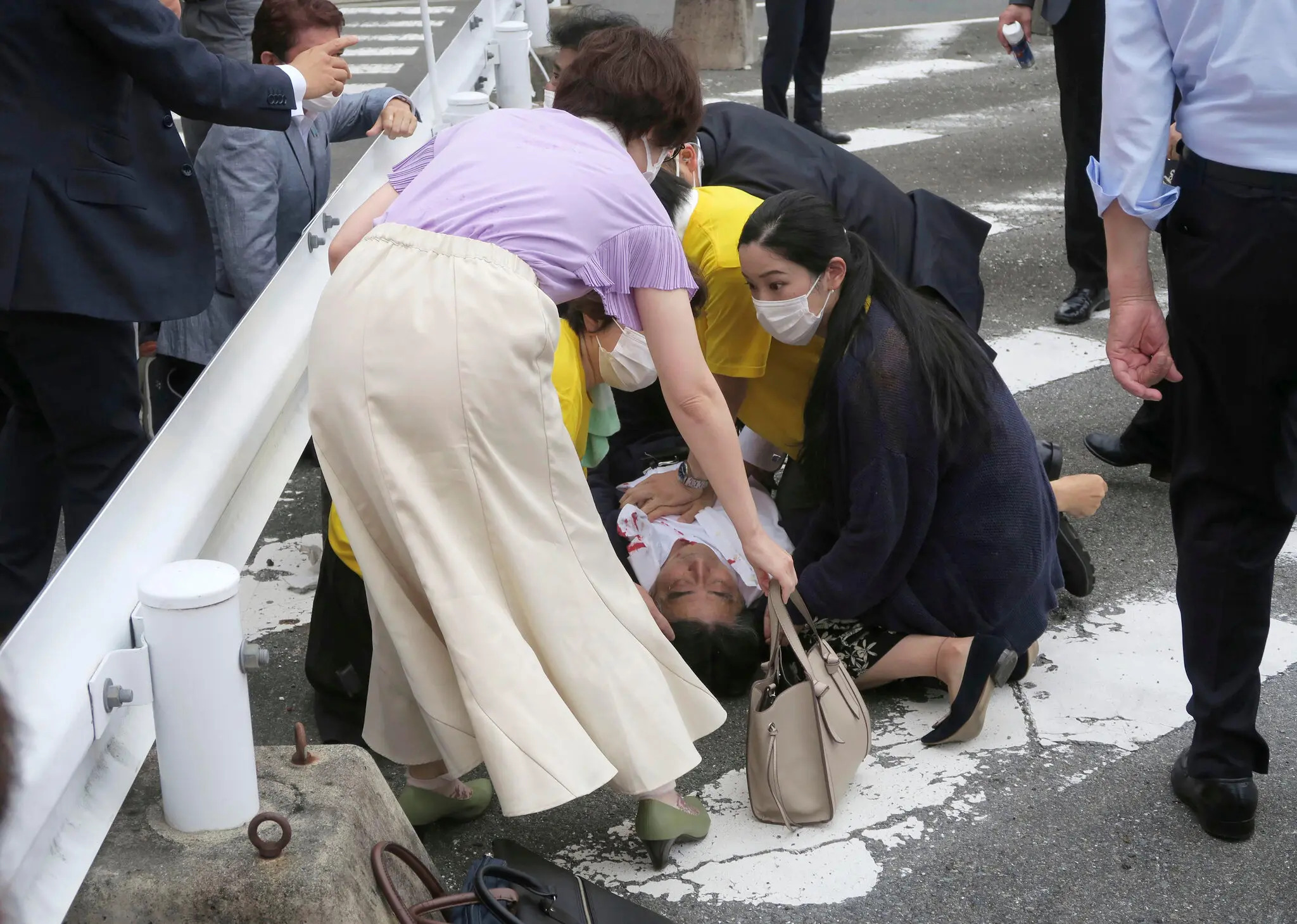 Shinzo Abe, 67, the longest-serving prime minister of Japan, was shot and killed on Friday. He was out supporting a candidate for the upcoming elections.

Prior to the news of Mr. Abe's passing, the police detained a suspect, Tetsuya Yamagami, 41, on an initial accusation of attempted murder.

According to the Japanese Fire and Disaster Management Agency, Mr. Abe suffered gunshot wounds to his left chest and right neck. Social media footage depicted Mr. Abe, 67, lying bleeding on the ground in the western city of Nara, close to Kyoto.

Mr. Abe was declared dead at the hospital shortly after 5:03 p.m. local time, according to Hidetada Fukushima, professor in charge of emergency medicine at Nara Medical University Hospital.

According to Dr. Fukushima, Mr. Abe was brought to the hospital around 12:20 p.m. with no indications of life. He claimed Mr. Abe had two gunshot wounds.

The former Japanese leader was shot "deep enough to reach his heart," according to the doctors, and the medical staff was unable to stop the bleeding.

Dr. Fukushima claimed that despite transfusions and attempts to control the bleeding, doctors were unable to revive him.

Before Mr. Abe's passing was revealed, Prime Minister Fumio Kishida described the attack as a "heinous act." He added,

It is barbaric and malicious, and it cannot be tolerated.

Kei Sato, a 43-year-old member of the Liberal Democratic Party from Nara who was seeking reelection to the Upper House of Parliament, was the subject of Mr. Abe's speech during the campaign. Less than a minute had passed since Mr. Abe began speaking when he heard two explosions behind him.

The L.D.P.'s local chapter's Secretary General, Yoshio Ogita, 74, was standing next to Mr. Abe. He claimed to have witnessed a white smoke plume ascending into the sky and heard two loud noises.

He admitted that Friday afternoon during a phone conversation, "I didn’t know what had happened. I saw him collapse."

After the gunfire in the area of Yamatosaidaiji Station, pictures posted on social media showed a guy being tackled. The Japanese channel NHK stated that the man was a Nara resident. The cops claimed to have found a primitive weapon.

Abe served as Japan's longest-serving prime minister and the previous head of the Liberal Democratic Party from 2006 to 2007 and again from 2012 to 2020 before stepping down for health concerns. Since leaving office, he has continued to be well-known and frequently makes media appearances to address current events.

Prior to the Sunday Upper House elections, Abe was giving a speech in Nara city in support of LDP candidates when the incident occurred.

The public broadcaster showed a video of Abe speaking to a small group of people in front of Yamatosaidaiji railway station just before the shooting. Two shots may be heard in later videos, and smoke can be seen rising.

"This is not a forgivable act," Japan's Prime Minister Fumio Kishida stated in a press conference on Friday, adding that he will "take appropriate measures."

People had gathered around the former leader as he lay in the street, according to photos taken at the time. His white clothing looked to have blood spots on it.

Helicopter transport brought him to the hospital, where doctors launched a last-ditch effort to save his life. According to NHK, which cited police, he was reportedly shot twice, once in the chest and once in the neck.

Eyewitnesses See A Man With A Gun

Eyewitnesses claimed to have observed a man fire twice at Mr. Abe from behind while holding what they characterized as a heavy gun.

Security personnel apprehended the attacker, who made no attempt to flee, and took his allegedly homemade gun into custody.

Tetsuya Yamagami, a resident of Nara, has been named as the suspect. He is reportedly thought to have served in Japan's Maritime Self-Defense Force, which is the country's version of the Navy.

As Japan's upper house elections are scheduled for later this week, Mr. Abe's address was part of a campaign for his old party, the Liberal Democratic Party.

Later, according to local accounts, ministers around the nation received instructions to return right away to Tokyo.

The hashtag "We want democracy, not violence" was trending on Japanese social media, with many users expressing their anger and outrage at the incident.

Videos posted on social media captured the scene at a three-way intersection in the city of Nara shortly after Shinzo Abe was shot.

A large group of Japanese people, many of them wearing orange campaign shirts and some of them knelt, had gathered close to a red box where Mr. Abe had reportedly been sitting when he was shot while giving a speech during the campaign. A woman who was sobbing was led away. It was difficult to see Mr. Abe.

A passerby exclaimed, "I can’t believe it. Who shot him?" Another person requested a medical professional while speaking on a loudspeaker.

A small group of individuals could be seen several yards distant in the aerial video, looking to be carrying someone. Larger numbers of onlookers observed from a sidewalk.

Mr. Abe was supporting a candidate in the Sunday elections for the Upper House of the Japanese Parliament. After the shooting, officials said that all campaigns had been put on hold.

Mourners Around The World

Mourners have begun placing flowers near the site where Abe was assassinated in Nara, Japan. 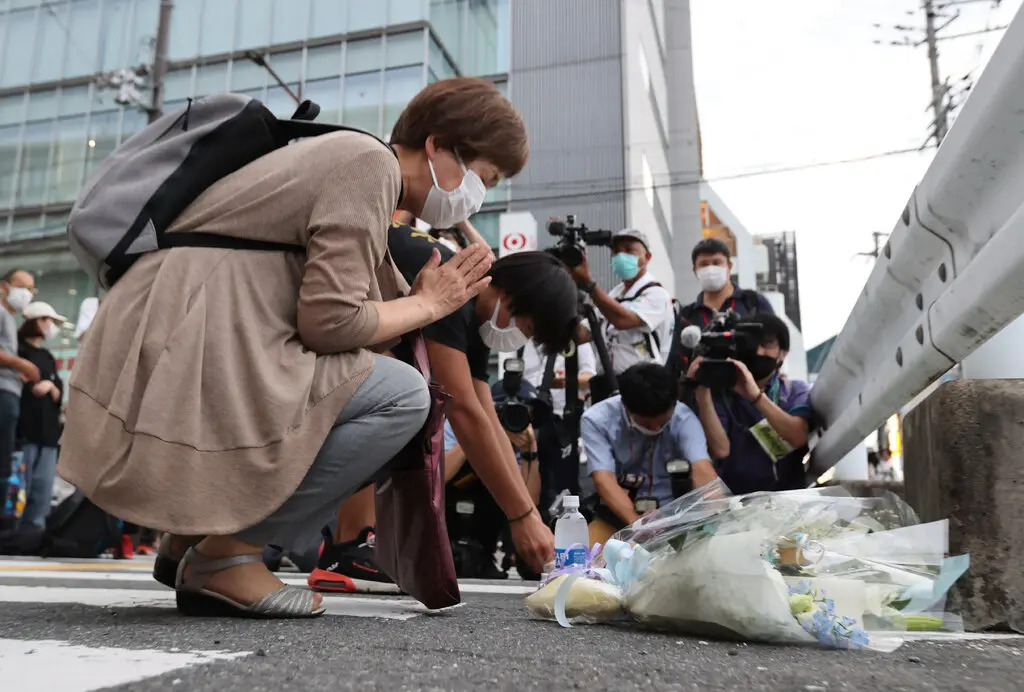 Meanwhile, Prime Ministers, Foreign Secretaries, and Presidents all around the world gave their condolences and sympathies to former Prime Minister Abe's family and to the whole nation of Japan.

Prime Minister Mark Rutte of the Netherlands said on Twitter, “At today’s cabinet meeting we paused to reflect on this dark day for Japanese democracy. I have fond memories of our friendship and the work we did together.” He added that the attack on Abe was 'cowardly.'

Prime Minister Mario Draghi praised Abe for "his innovative spirit, his reforming vision," and referred to him as a "protagonist in recent Japanese and international politics," adding that Italy was "shocked by the terrible attack, which affects Japan, its free democratic debate." Italy was "close to his loved ones, to the government and the entire Japanese people," according to Mr. Draghi.

The Irish foreign and defense minister, Simon Coveney, posted on Twitter that his country's sympathies were with all of the people of Japan, "Our thoughts are with all Japanese people at this very sad time."

In a telegram to Abe's wife, South Korean President Yoon Suk-yeol expressed his “condolences and sympathy to the bereaved family and the people of Japan over the loss of its longest-serving former prime minister and a respected politician,” according to his office. Yoon referred to the assault as an “intolerable act of crime.”

Czech Republic Prime Minister Petr Fiala posted on Twitter that he was "deeply saddened" and that he was sending his sympathies to his family and the people of Japan.

"Japan has lost a great Prime Minister, who dedicated his life to his country and worked for world balance," France's President Emmanuel Macron wrote on Twitter on Friday.

The Philippine Department of Foreign Affairs stated on Twitter that "Mr. Abe was greatly admired by many Filipinos. We thank him for his key role in the strengthening of Philippines-Japan relations and for establishing a very deep bond of friendship with our country."

Abe was described as the island's "precious democratic partner" and "staunchest friend" by Taiwan's foreign ministry. In a previous op-ed in the Los Angeles Times, he had urged the US to make it clear that it would defend the independent island against any Chinese invasion attempts in the wake of Russia's invasion of Ukraine.

Volodymyr Zelensky, the president of Ukraine, expressed his sympathies on Twitter, writing, "This heinous act of violence has no excuse."

Gun Violence Is Rare In Japan

In a nation with some of the strictest rules regarding the purchase and ownership of firearms, the attack on former Japanese Prime Minister Shinzo Abe was especially shocking.

According to data from the nation's National Police Agency, 10 gunshots in Japan were reported in 2021 that resulted in deaths, injuries, or property damage. One person was killed and four others were hurt in those gun-related incidents. Accidents and suicides are not included in the statistics.

According to Japan's firearms law, guns are generally not allowed in the nation. Although there are exceptions for hunting-related firearms, very few people go through the inconvenience of owning a firearm because the licensing process is time-consuming and expensive.

Before being able to purchase a handgun, a person must complete 12 steps, beginning with a gun safety course and continuing with a written test that is given three times a year.

The physical and mental health of the gun purchaser must be certified by a doctor. A thorough background investigation and a police inspection of the ammo locker and gun safe, which are required to store guns and ammunition, are additional stages.

According to the police department, there were around 192,000 licensed firearms in the nation in 2020, with shotguns and hunting rifles making up the vast majority of those weapons. That is less than Alabama's total number of registered firearms, which has a population that is around one-twentieth that of Japan.

It's unclear how the suspect in the Abe killing was affected by the laws governing gun ownership in Japan. Videos and pictures suggested that the involved gun was a homemade creation. 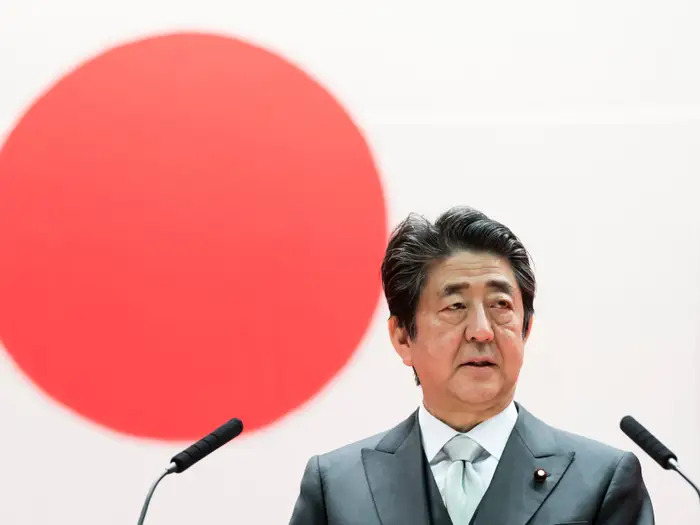 Prior to his resigning in 2020 due to ill health, Abe had spent two terms as prime minister, making him the longest-serving leader in Japanese history.

He still maintains a stronghold over the ruling Liberal Democratic Party (LDP), nonetheless, and is in charge of one of its key groups.

Prime Minister Fumio Kishida, his protege, will run in the upper house election on Sunday in an effort, according to observers, to break out of Abe's shadow and establish his premiership.

The "Abenomics" approach, which comprised audacious monetary easing and fiscal spending, is what made Abe most famous.

Additionally, after years of decreases, he increased the defense budget and increased the military's capacity to project power abroad.

His government changed the post-war, pacifist constitution in 2014, marking the first time since World War Two that forces might engage in combat abroad.

A ban on using the right to collective self-defense or defending a friendly country under assault was lifted the next year thanks to legislation.

However, Abe was unable to accomplish his long-held objective of amending the U.S.-drafted constitution by incorporating the pacifist Article 9 into the name of Japan's military, the Self-Defense Forces.

He cherished the desire to preside over the Olympics, which were delayed by a year to 2021 because of the COVID-19 epidemic, and was essential in helping Tokyo win the 2020 Olympics.