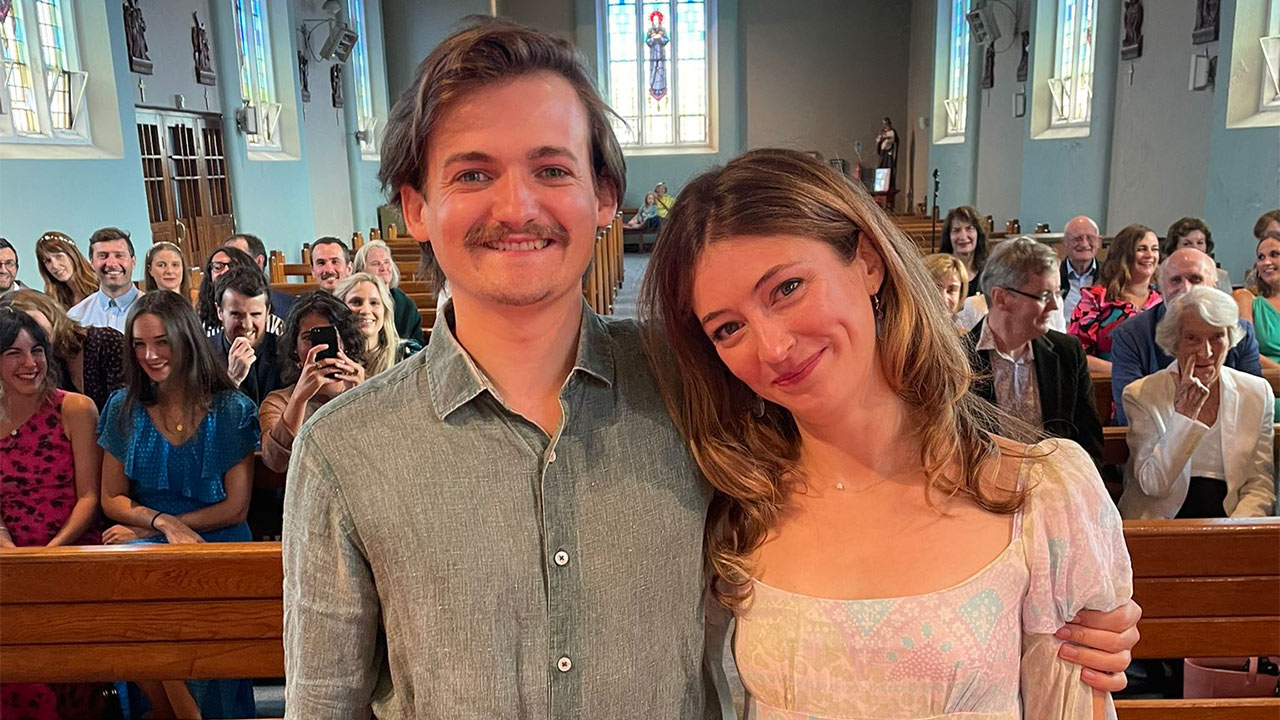 The actor who plays King Joffrey on "Game of Thrones" has married his longtime girlfriend, Roisin O'Mahony. The actor and comedian from the UK, Jack Gleeson got married Saturday in what looked like a pretty intimate set.

Parish priest Fr. Patsy Lynch posted photos of the low-key wedding on Twitter and wrote, "Very simple, prayerful, and dignified marriage ceremony for Film Celebrity Jason Gleeson and Roisin: The Glen Church." Fr. Lynch said that the event was a pre-wedding ceremony, and he also said that a second event is coming up very soon.

The weddings in "Game of Thrones" were notorious for going horribly wrong. As if the Red Wedding hadn't been enough, not long after that came the Purple Wedding.

Jack Gleeson, who played Joffrey Baratheon, is, according to all accounts, a far better person in real life than the character he portrays on Game of Thrones. Over the weekend, he wed his longtime partner, the actress, and comedian Róisn O'Mahony, in a ceremony that was noticeably less chaotic than the traditional wedding.

According to the Independent, Gleeson and O'Mahony got married in a small service in the Church of the Sacred Heart of the Glen in Ballinskelligs, which is located in Ireland.

Despite this, it appears like a more significant ceremony is scheduled to take place later in England. In any event, we pray that the happy couple receives seven blessings!

In honor of the event, the actor, who is 30 years old, was seen sporting a pair of brown loafers to go with his gray dress trousers, a green button-down shirt, while the bride donned a pastel and multicolored outfit.

In addition, the post had two images: one showed O'Mahony clutching a bouquet of pink flowers, and the other showed the couple inside the chapel, with their wedding guests seated behind them.

In an interview with The Irish Independent, Lynch stated that despite the fact that the couple had a "beautiful wedding," this event was really "the pre-wedding ceremony," as there will be a subsequent wedding ceremony in the near future.

He then went on to provide additional information on the event, after which he acknowledged how significant Gleeson's connection to Ballinskelligs and the church is.

"Jack texted me this morning to tell me that it was such a great and moving ceremony, and that thereafter they went for a dinner," he added. "He went on to explain that they went to a restaurant." "Because it meant so much to them in terms of Ballinskelligs and The Glen, they were absolutely happy, and there was a great, calm mood right from the start."

After commenting on how "uncomplicated" and "content" everyone was at the wedding, Lynch reminisced about the time he first met Gleeson and lauded the latter's character.

The fact that everyone in this area is familiar with Jack demonstrates that they are an integral part of the larger community. It was as if we had known one other all our lives when I first met him because he is the kind of person that is like that. There is nothing manufactured here," the priest went on to say.

Gleeson has a history of keeping his private life out of the public eye, as seen by the fact that he does not maintain any active social media profiles and has not yet publicly publicized his plans to get married.

In a small ceremony in Ireland, Game of Thrones actor Jack Gleeson and his girlfriend Roisin O'Mahony got married. Lynch told the Irish Independent, ‘The real ceremony will take place over in England, but the family have been holidaying down here in Ballinskelligs, The Glen, for many years and they have so many happy memories here.’