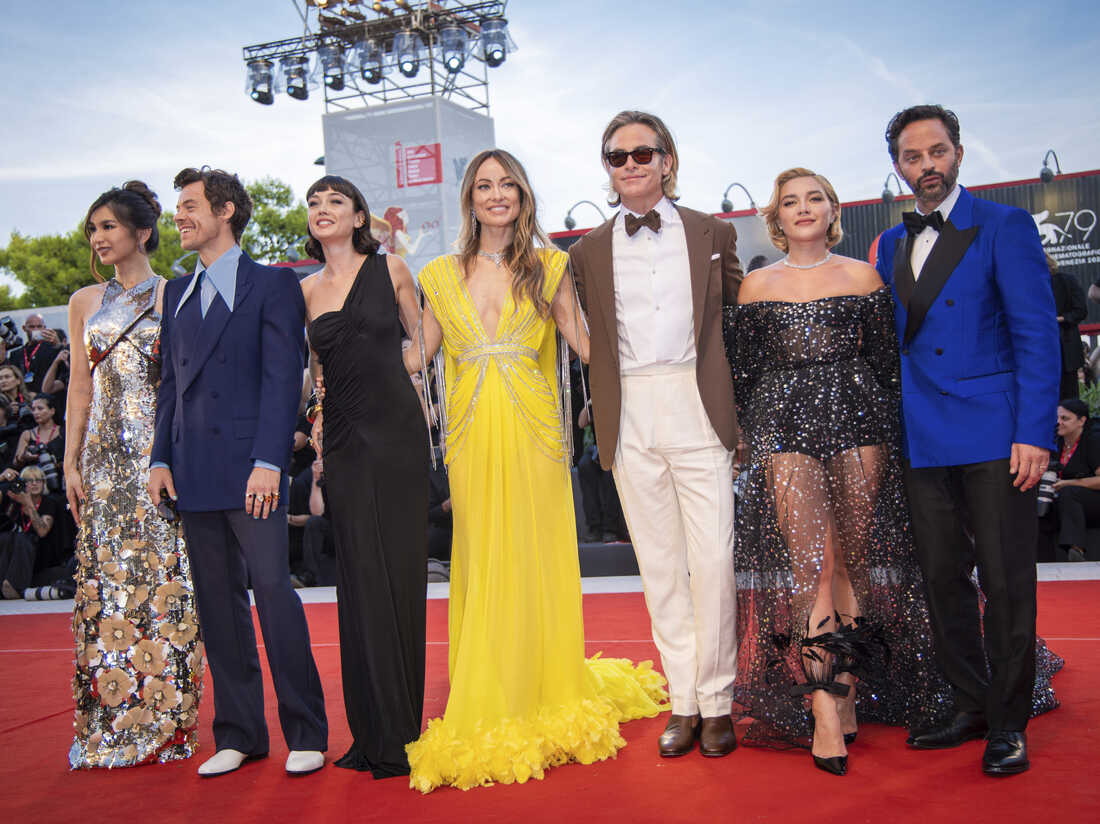 After the rocky start of Olivia Wilde's "Don't Worry, Darling" movie premiere at the Venice Film Festival, Warner Bros. is trying to keep the director and her star, Florence Pugh, from getting into more trouble. The movie doesn't come out until Sept. 23, which is still 16 days away.

This is a long time for a campaign that has gotten the media talking about everything from Harry Styles' (alleged) spittle to Pugh's eye contact, or lack thereof.

But the studio won't have to go through another stressful press event with a lot of attention on it in the next few weeks. Two insiders say that Pugh won't go to the film's red carpet premiere in New York on Sept. 19, which is the only one on the schedule.

Warner Bros. said in a press release after this story came out that neither Pugh nor her co-star, Chris Pine, would be at the New York Event, which is an IMAX Live screening and Q&A that will be streamed to more than 100 IMAX theaters. The event will feature the cast of the movie.

The official reason for Pugh's absence is that she is in Budapest filming Dune: Part Two, and director Denis Villeneuve can't let her go to a press event for another movie. She left the Dune set once to go to the world premiere of Don't Worry Darling in Venice, but she didn't go to the press conference.

Two more people who worked on the movie say that the tension between Wilde and Pugh started in 2020 when Wilde started dating the movie's male lead, Styles, and Pugh didn't like the relationship. Around the same time, Wilde broke up with her partner Jason Sudekis.

Since then, she has been going strong with Styles. Even though Wilde isn't the first director to date her star, Steven Spielberg started dating his future wife Kate Capshaw while they were filming Indiana Jones and the Temple of Doom, to give just one example the practice has become less popular in recent years because it can lead to favoritism on set. Said the person from the set,

"I could see that being a thing if she cheated on her partner with Harry Styles and Florence knew about it.

But a different set source disagreed with that idea.

“Do I think her and Flo hate each other? Absolutely not. Was it fun and enjoyable on set? Absolutely. Were [Wilde and Styles overtly] romantic, or did she favor him? Nope. She was very professional. No one would be talking about this if this was a male director,”

Wilde and Pugh sat on opposite ends of a row at the Venice premiere. Pine sat between Styles and Wilde. The couple was placed far away from each other so that their relationship wouldn't distract from the movie.

Even though the psychological thriller was set up for an awards season push, Don't Worry Darling won't have a press junket before it opens and only has a few events planned, none of which will have Wilde and Pugh in the same place at the same time. Based on the reviews, the movie has a 41% rating on RottenTomatoes, Pugh seems to be the one most likely to do well during awards season.

Don't Worry, Darling has caused more than just Wilde and Pugh trouble. In April, Warner Bros. was promoting the movie at CinemaCon in Las Vegas. On stage, Wilde was given custody papers by Sudekis, which had never happened before at the annual event where studios show off their upcoming movies.

That was only a taste of what was to come. In an interview with Variety, Wilde made it sound like she had fired Shia LaBeouf and replaced him with Styles because LaBeouf's "process was not conducive to the ethos that I demand in my productions."

LaBeouf then shot back that he quit the movie because he didn't have enough time to practice. He also shared a video in which Wilde seemed to side with LaBeouf in his fight with Pugh. She said,

“I think this might be a bit of a wake-up call for Miss Flo, and I want to know if you’re open to giving this a shot with me, with us.”

By the time the first show opened in Venice, reporters at the festival were analyzing every move the actors made and how they worked together. During the four-minute ovation, Variety said that Pugh and Wilde didn't look at each other. Then, a clip of Styles looking like he might have spat on Pine as the pop singer sat down at the premiere went viral.

In a statement to Rolling Stone, a person who works for Pine said that Styles did not spit.

“This is a ridiculous story… a complete fabrication and the result of an odd online illusion that is clearly deceiving and allows for foolish speculation. Just to be clear, Harry Styles did NOT spit on Chris Pine……there is nothing but respect between these two men and any suggestion otherwise is a blatant attempt to create drama that simply does not exist.”

It's even possible that all the talk of drama has caused real tension to build up. One person who worked on the movie told Rolling Stone that there was no trouble between Wilde and Pugh on set.

But the same source knows what's going on with the movie and how it's being covered in tabloids.

"I don't know about the Shia LaBeouf thing. I don't think Wilde and Flo are the same thing. I think she and Harry are going out. I think she and Sudekis are together because of how he gave his lawyer papers. The source said, "It's like a salad of good rumors."

Even though there is a lot of controversy about "Don't Worry Darling" movie premiere, the studio doesn't think it will hurt how well it does at the box office or how Styles' fans will react to it.

During the world premiere of the movie, everyone was looking at the actors. Chris Pine and Harry Styles had a short, strange conversation that went viral on social media. Some people thought that Styles, who used to be in the band One Direction, spat on Pine.