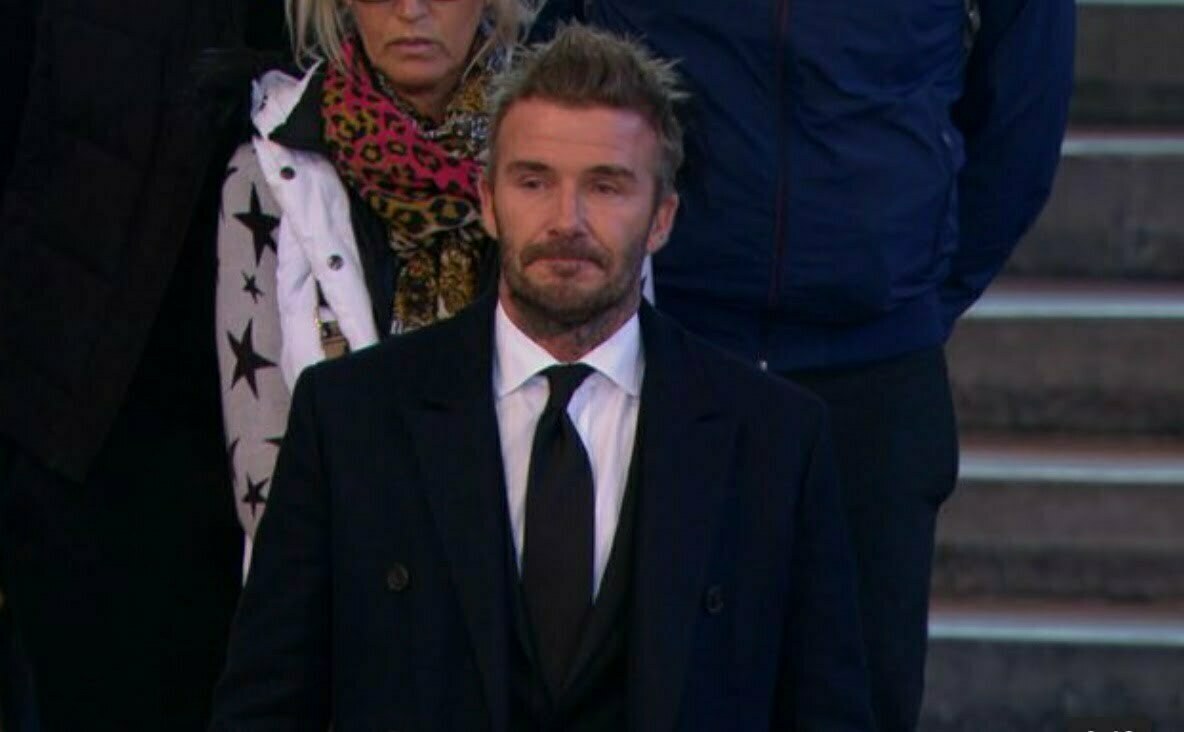 It has been said that David Beckham had the chance to use a special line to pay his respects to Queen Elizabeth II, but he turned it down. People have praised the football star because David Beckham waited for 13 hours in line on Friday to see the Queen lying in state in Westminster Hall (16 September).

He joined other people who were sad in the official line at 2 a.m., and he said that he ate "Pringles, sherbet lemons, sandwiches, coffee, and doughnuts" to get through the night.

An MP is said to have invited the 47-year-old former England captain to pay his respects to the late monarch as his guest. MPs get special passes that let them skip the line and can bring up to four guests with them. This has been called "elitist" and "unfair" by people in the public.

The Daily Mail said that Beckham turned down the offer to go to the front of the line.

David Beckham Waited For 13 Hours And Declined To Skip Queue

David Beckham queues for 13 hours to pay respects to Queen

David Beckham, a British athlete, and businessman, stood in line for 13 hours outside Westminster Hall with thousands of other people to say goodbye to the late Queen Elizabeth II.

Beckham told Sky News that he had been waiting in line since 2:15 a.m. (London time). Beckham said:

"We all want to celebrate our Queen, Her Majesty,"

It was recently found out that the England captain, who is 47 years old, was invited by an MP to pay his respects to the late monarch. MPs and members of the House of Lords can skip the line and bring up to four guests with them. A source told the DailyMail:

“David could have avoided all of the queuing but he wanted to be like everyone else. He said his granddad wouldn’t have [jumped the queue] so neither would he. He had been wondering all week when the best time to go [was] and finally he went for this morning."

Beckham said that he and the people around him have been celebrating and telling stories about the Queen in a different video interview with BBC News' Vicki Young. Beckham said, explaining why he chose to stand in line with his fellow countrymen.

He also said that people in line have been eating Pringles, sandwiches, coffee, donuts, and sherbert lemons. A woman in the crowd praised the former England team captain for deciding to line up with everyone else.

Beckham told ITV news that he grew up in a royalist family and that even his grandparents would have lined up. He said:

"I'm here on their behalf, of my family, and to be with everybody."

Shortly after 3 p.m., the football star, who was wearing a black suit, finally entered Westminster Hall and stood in silence in front of the Queen's coffin, which was covered with the Royal Standard flag and the Imperial State Crown.

Beckham had met Queen Elizabeth II several times over the years, and it was the Queen who gave him his Order of the British Empire, or OBE. Beckham's grandparents and his wife Victoria were there for the ceremony.

Sharon Osbourne, a TV star, also stood in line with the general public, not in the VIP line where most famous people did. Queen Elizabeth II's body will lie in state at Westminster Hall until Monday morning, when it will be taken to Westminster Abbey for her funeral.

On Friday night, the late monarch's children King Charles III, Princess Anne, Prince Andrew, and Prince Edward stood guard around her coffin. On Saturday, her grandchildren, including Charles' sons Prince William and Harry, will do the same.

On Monday, the state funeral for Queen Elizabeth will take place at London's Westminster Abbey. More than 2,000 people, including heads of state and government from all over the world, have been invited.

David Beckham got a lot of praise because he waited in line for 13 hours. Other famous people, like the hosts of This Morning, Philip Schofield and Holly Willoughby, and MPs, have been criticized for using special passes to get in and out of the cemetery faster.

Schofield and Willoughby were members of the press, so they were able to see the Queen lying in state without waiting in line with the public. Instead, they watched the event from a separate press gallery.