Carmen Villalobos - The Happily Ever After Of The Colombian Telenovela Queen 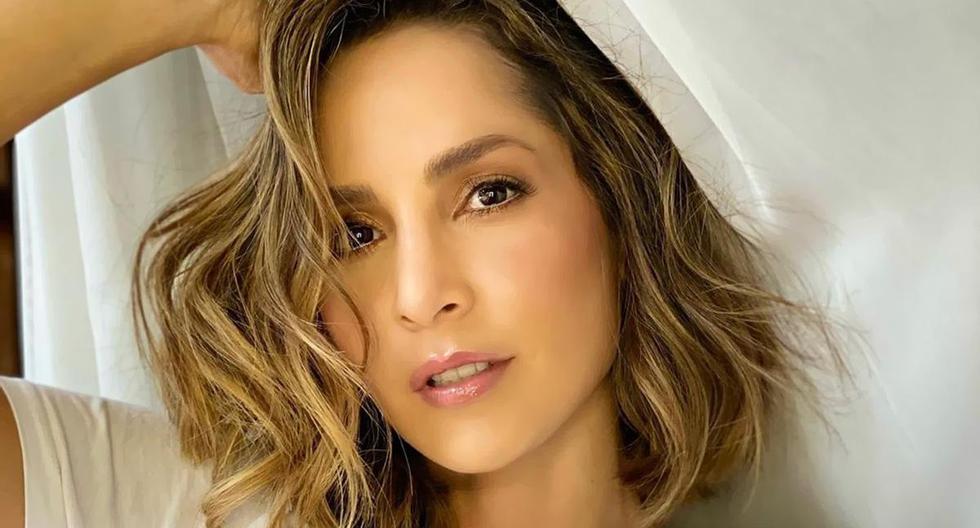 There are only a few celebrities who are fortunate enough to enjoy a successful work-life as well as a happy personal life.

Carmen Villalobos, a Colombian actress and a model, is one of these celebrities. After a ten-year relationship with her significant other, actor Sebastian Caicedo, they finally tied the knot in an extravagant Colombian wedding. 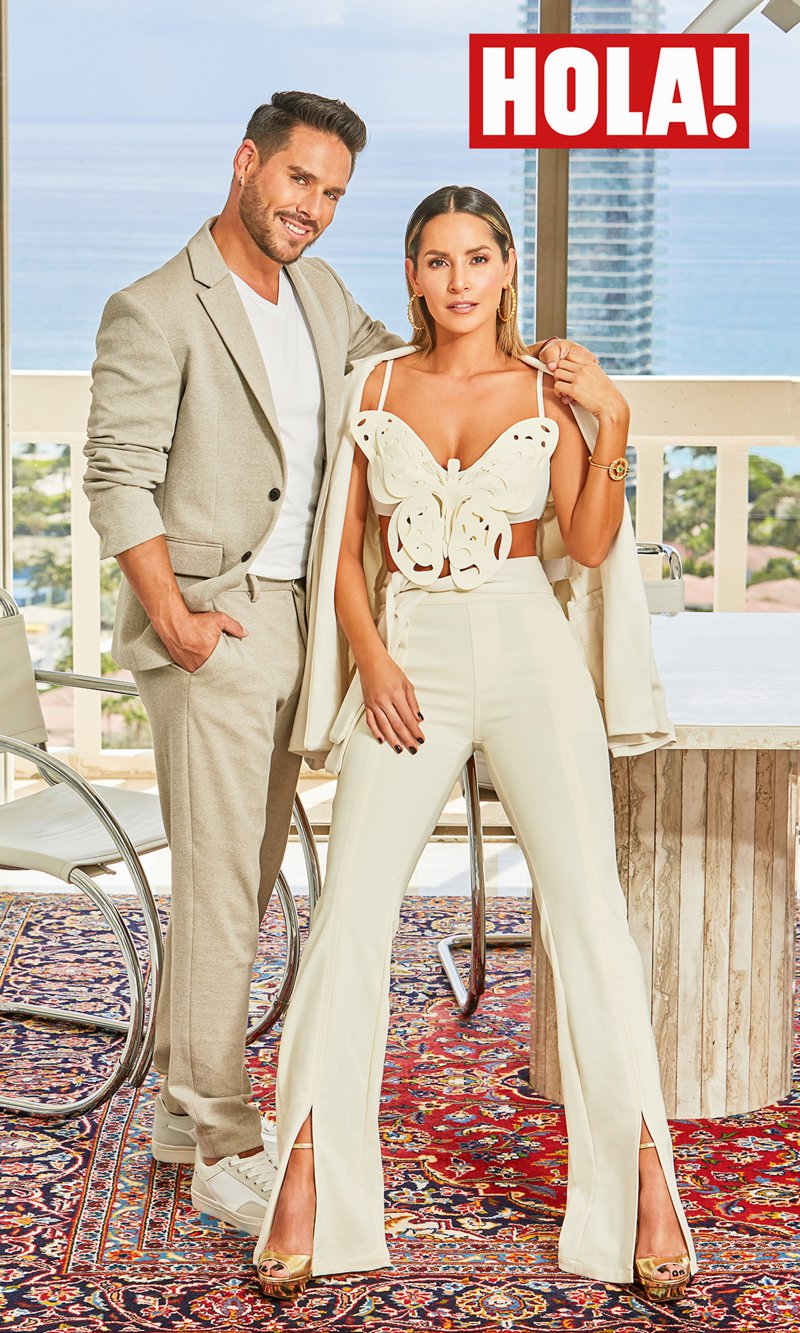 Carmen Villalobos with her husband, Sebastion Caicedo, for the front cover of Hola! magazine

Sebastian Caicedo is the husband of Carmen Villalobos.

The couple started developing feelings for each other while filming the telenovela Nios Ricos, Pobres Padres, especially with the intense emotions that their script demanded on set.

By the time they finished filming the Telenovela, Sebastian was already single and casually inquired about Carmen's boyfriend, inviting her to join him for a movie. As a result, their romance took off. Even though they were always in separate locations at various times, Sebastine made it a point to visit his girlfriend once a month.

In August 2018, Sebastian finally had the courage to propose to Carmen. He proposed to her via live call on the set of the reality television show Exatlón Estados Unidos. 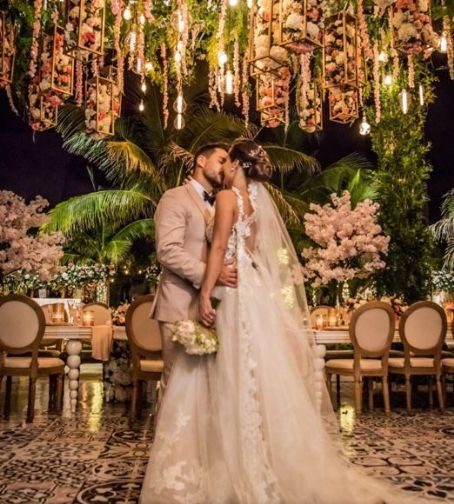 Carmen Villalobos and Sebastian Caicedo kissing for their wedding photoshoot

After an 11-year romance as boyfriend and girlfriend, Carmen and Sebastian finally settled down. In front of 150 guests, including close relatives and friends, they got married at a grand beach wedding in Cartagena, Colombia.

As she walked down the aisle, the bride donned a gorgeous white gown designed by Jorge Duque. The lengthy veil she wore accentuated her beauty even more. Several members of the international press appreciated her wedding gown.

The groom, Sebastian, was dressed in a fashionable trendy light pink suit.

How Old Is Sebastian Caicedo? 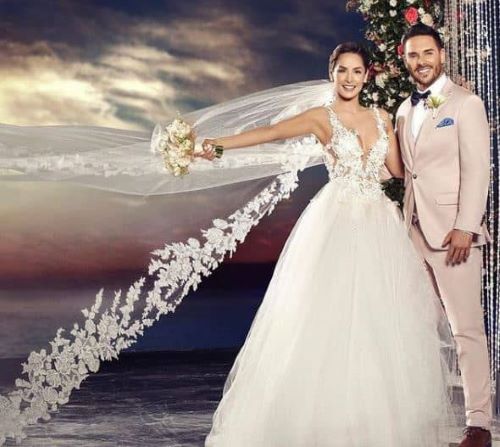 He was born on November 12, 1981, in Bogotá, Colombia. His real name is Juan Sebastián Caicedo Londoño.

Just like his wife, he is also a famous actor in Colombia before they moved to Miami for a greater career opportunity. 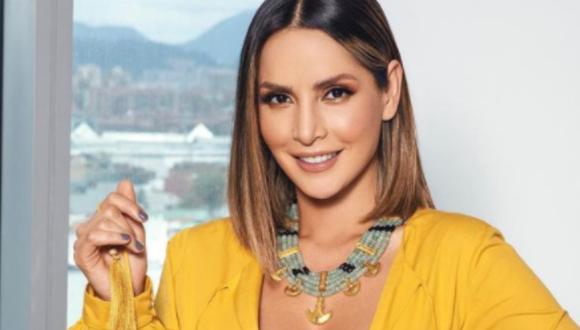 Carmen Villalobos is most known for supporting roles in telenovelas such as La Tormenta and Amores de Mercado. Villalobos is also known for her lead roles in Sin Senos no hay Paraiso as Catalina Santana.

Following that, in 2003, she played Ernestina "Nina" Pulido in the telenovela "Amor a la plancha."

After that, she went on to star in the TV show 'Dora, la celadora.' In 2005, Villalobos was cast as a co-lead in the television series "La Tormenta." She was quickly cast in the sitcom "Amores de Mercado" as Beatriz "Betty" Gutiérrez. She portrayed Catalina Santana, an aspiring prostitute, in the telenovela 'Sin senos no hay paraso.' The Columbian actress was then offered a leading role in the television series "Nios ricos, pobres padres."

Villalobos starred as Nadia Monsalve in the 2010 film 'Ojo por ojo,' and in the 2011 film 'Mi corazón insiste en Lola Volcán.' She played Flora Mara Daz in the soap "Made in Cartagena" a year later.

Villalobos was cast in the television series "Las Princesas" as Vanessa Mondragón not long after.

In 2016, the actress reprised her role as Catalina Santana in 'Sin senos s hay paraso,' a sequel to 'Sin senos no hay paraso.'

Carmen Villalobos is a gifted and versatile actor and model. She has a successful career and a happy, strong marriage. Something that is so rare in the entertainment industry.