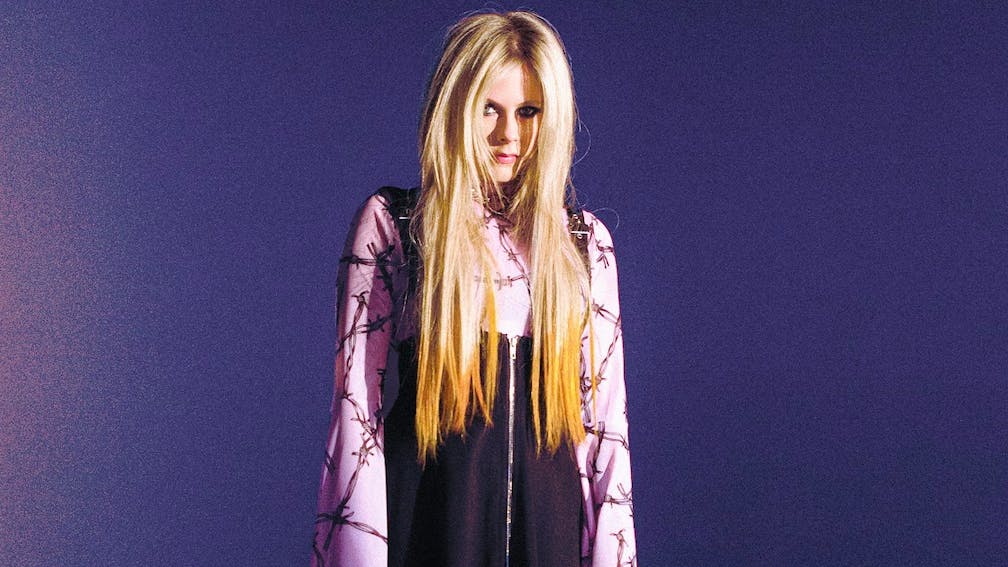 The musician, who is nominated for a Grammy, is collaborating with the fashion firm Killstar, which is based in the United Kingdom, to create a line of garments, accessories, and intimates that are modeled after Lavigne's characteristic look.

“I’ve always been glam, rock ‘n’ roll with a twist of goth — all depending on my mood,” Lavigne said in an email interview. “I love going from Dickies and Dr. Martens to Versace and Vivienne Westwood. I think it shows itself in the Killstar collection because it is edgy and elegant all at the same time.”

"Chill out, what ya yellin’ for? Click the link in our bio to become a Killstar VIP and gain early access to our extra special drop," the brand captioned the photo, which shows Lavigne posting in a bodycon skeleton dress, skull and crossbone hair clips and chunky black boots.

The whole collection is bright pink, and some of the pieces have skeletons or barbed wire designs on them.

There are crop tops, bodysuits, oversized tops, sweaters, skirts, pants, and dresses, as well as accessories like a rolling suitcase, a wide-brimmed hat, and heeled combat boots.

Lavigne said that the suitcase and the Ribcage Maxi Dress, which is a black dress with a pink skeleton design, are her favorite pieces from the collection.

Fans were quick to say that they liked the photo and that they thought the collaboration was "a match made in heaven."

Over the last 20 years, the musician has been in the spotlight.

Her first album, "Let Go," got her Grammy nominations for Best New Artist, Song of the Year, and Best Pop Vocal Album.

Lavigne has worked with fashion and beauty companies like Kohl's and Sally Hansen in the past.

She used to have her own line of clothes for young people called Abbey Dawn.

In 2012, she worked with JustFab on a collection of accessories.

Lavigne's style used to be more punk and grunge, but it has changed into a more pop-punk look with bright colors and gothic patterns.

“My style has evolved from tomboy and sporty to rock ‘n’ roll glam,” she said. “Everyone knows during my first album I was wearing a lot of baggy clothes, skate shoes and ties, but then I got really into corsets, bondage pants and having fun with tutus. My style today is a blend of everything I have worn in the past.”

The Avril Lavigne by Killstar collection is now on the website of the brand and costs between $14.99 and $59.99.

Killstar was started in 2010 with the goal of making clothes and accessories with a "twist of darkness" by "channeling emotional power and raw energy into every thread."

Fans of Lavigne were quick to share how excited they were about the news.

In the comments section of the Instagram post about the announcement, one fan wrote, "The dresses!!!" and added a few fire emojis. A second person on social media said, "This is such a great collaboration. I'm not going to lie, you made me cry a little bit." A third person said, "Killstar and Avril? Wow.”

Style-wise, Lavigne and the collection have a lot in common.

During her career, the "Girlfriend" singer has worn fishnet tights, all-black outfits with pink accents, and graphic T-shirts, making her look like the perfect punk princess.

This isn't the first time this year that Lavigne has been praised for sticking to her tried-and-true pop-punk style.

Fans were quick to praise Lavigne's style, saying that she "hasn't changed a bit" in the last 20 years.

The collaboration between Lavigne and Killstar clothing line came out on August 24, but Killstar VIP members can buy it two days early, on August 22.