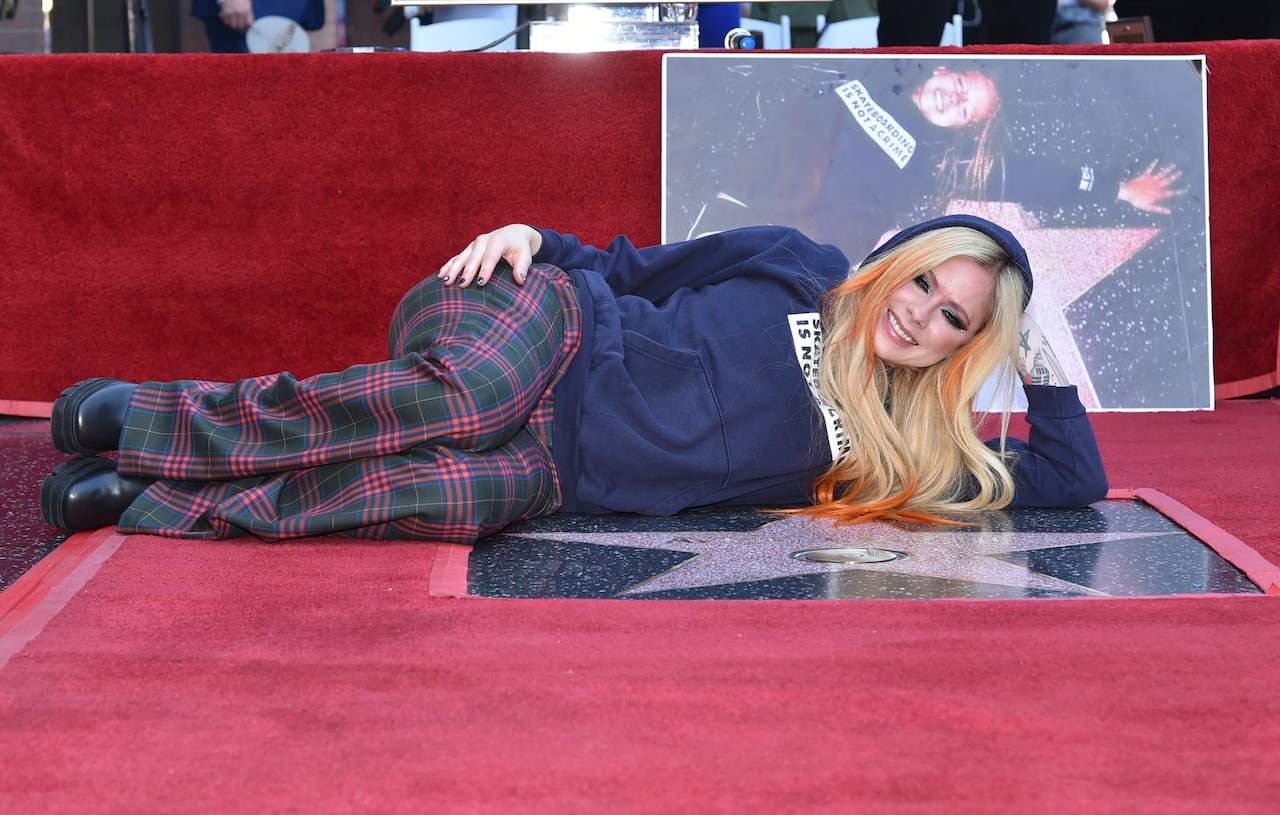 On Wednesday, the 20th anniversary of her first album, "Let Go," Avril Lavigne gets a star on the Hollywood Walk of Fame. During the ceremony, the pop-punk pioneer talked about going to Los Angeles for the first time when she was 16 and seeing the famous star-lined path for the first time.

She even showed a picture of herself as a teenager on that trip. She was wearing a navy hoodie with the words "Skateboarding is a Crime" on it. Then, in the middle of her speech, she changed into the same sweatshirt.

“Today, I love making music more than ever,” the singer said from the podium, according to Variety. “I feel so inspired. And I hope that the next 16-year-old from their small town who comes to Hollywood one day, full of hopes and dreams, sees this star and thinks to themself, ‘Oh my god, my name could be there one day, too.’ Because it can. What an amazing 20 years, and I can’t wait for the next 20, bitches! Let’s go!”

Avril Lavigne Gets A Star On The Hollywod Walk Of Fame

Avril Lavigne gets a Hollywood Walk of Fame star

Avril Lavigne, who is known as Canada's "pop-punk princess," now has a star on the Hollywood Boulevard Walk of Fame. The person from Napanee, Ontario, became the most recent person in the entertainment business to get a star on a stretch of sidewalk on Hollywood Boulevard.

The 37-year-old singer is celebrating the 20th anniversary of her first album, Let Go, which launched her career with the song "Complicated" and the hits "Sk8er Boi" and "I'm With You." Avril Lavigne is very happy because one of the stars on the Hollywood Walk of Fame now has her name on it.

Through her Instagram page today, Sept. 1, the pop-punk singer showed her fans what it was like when her Hollywood star was first shown to the public. Her fiance, Mod Sun, the American rapper Machine Gun Kelly, and the singer John Feldmann were also at the event.

“Look Mom. I got a star on the Hollywood Walk of Fame,” she said.

"I just think of my first trip coming to Los Angeles being in Hollywood to work on my first album," she said of the experience in an interview with ET Canada. "I was 16 and I visited the Hollywood Boulevard, came to the Walk of Fame."

Lavigne said she was wearing her favorite hoodie with the words "skateboarding is not a crime" on it at the time. She wore it again on her big day to honor the event.

"I never imagined in a million years, 20 years later, that I would have a star on the Hollywood Walk of Fame. I'm from a really small town in Canada," she continued. "So you know, it's still like 'pinch me, can't believe it happened.'"

Lavigne said that the last 20 years have been wonderful, and she is thankful for her fans. She is also excited to see what will happen in the next 20 years.

She said, "I love music more than ever. I'm writing songs like crazy, and I'm working on a lot of fun projects, like a Sk8er Boi movie."

With her plaid pants, chunky shoes, and Joel Madden and Ryan Cabrera there, it looks like a scene right out of 2017, when we all wore ties over our t-shirts and studded Hot Topic bracelets.

“Thank you guys so much. Thank you to my amazing gift of fan base, to my family [for being] super supportive still to this day and to my amazing collaborators,” the “Sk8er Boi” singer stated via her Instagram Stories. “I’m so grateful and it’s so f*cking cool.”

She also posted a slideshow of pictures of herself and her fans hanging out by her new star. Lavigne's seventh studio album, "Love Sux," came out in February of last year. She is known for songs like "Complicated," "My Happy Ending," and "Girlfriend." In April, she and Mod Sun said they were getting married.

The good old days! Congrats, Avril! You deserve to get your own star in the Hollywood Walk Of Fame. We are excited to hear more news from you!