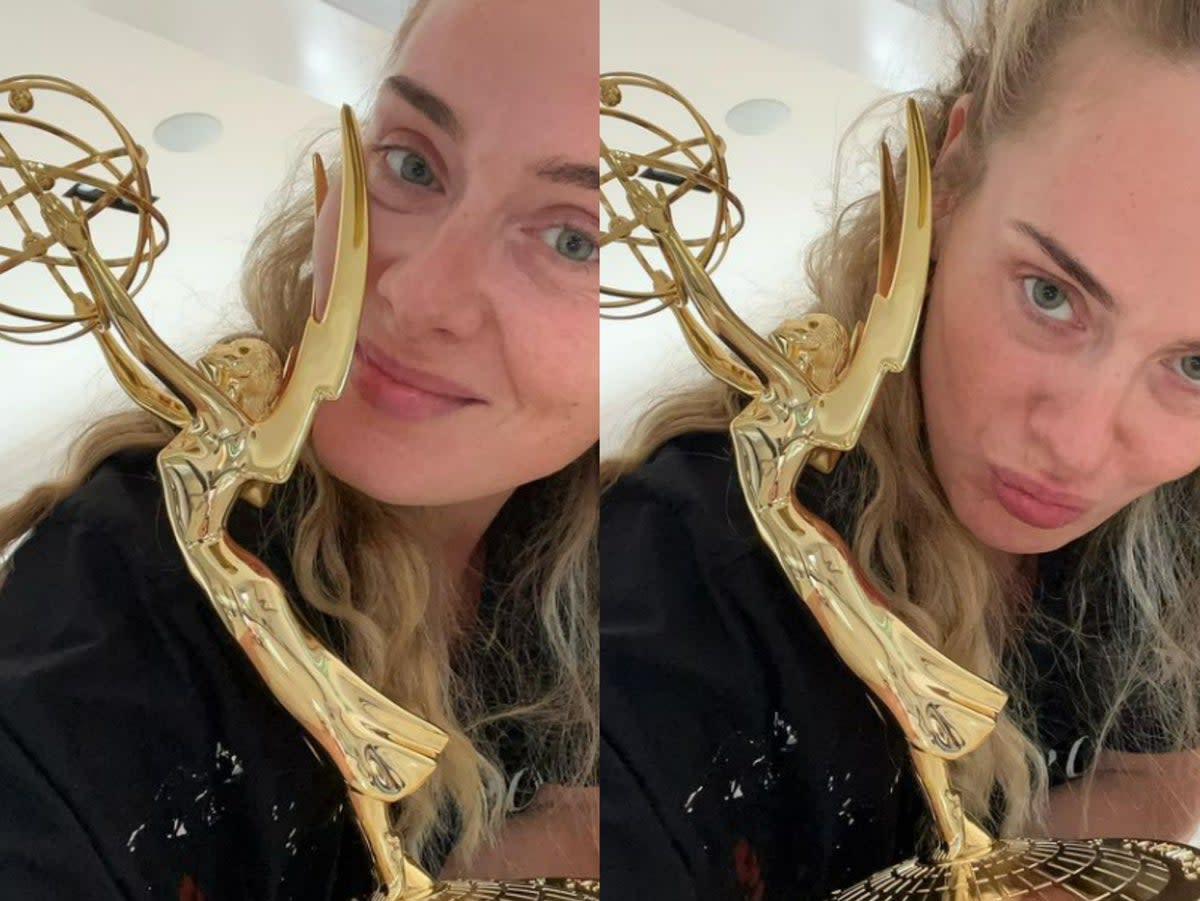 Now that Adele has won an Emmy, the singer is on her way to becoming an EGOT winner soon. Adele reacts to her Emmy win and recently posted selfies with the Emmy statuette on Instagram. She did this on Sunday, September 4, after the 2022 Creative Arts Emmy Awards, where Adele: One Night Only won 5 major awards and was one of the night's top winners.

She wrote on Instagram about how happy she was about it,

"Bloody hell I’m pleased as punch! Thank you @mrbenwinston for dropping this round to me this afternoon!! Trust me to officially have an EGO."

Adele also tagged one of the people in charge of making Adele: One Night Only. Adele won the Emmy for the best-pre-recorded variety special at the Creative Arts Emmys.

So, Adele: One Night Only was named one of the top five winners at the 2022 Creative Arts Emmy Awards, where five of the night's top awards went to shows. The US TV concert special aired last November, and Oprah Winfrey interviewed the star while she sang songs from her album "30" at the Griffith Observatory in Los Angeles.

It won five awards, including Outstanding Variety Special (Pre-Recorded). This brings Adele one step closer to EGOT status, which is a small group of people who have won the four major Emmy, Grammy, Oscar, and Tony awards. Adele has already won 15 Grammys, and her song "Skyfall" won the Oscar for Best Original Song.

Thank you so much @televisionacad, I’m so so honored to receive this. Big up to everyone involved. @griffithobservatory thank you for letting me sing up on your mountain and big love to all the other nominees x.

Adele had already won 15 Grammys and an Oscar. Now, all she needs is a Tony to become an EGOT winner, which means she has won an Emmy, Grammy, Oscar, and Tony, which are the four biggest awards in American entertainment.

Adele: One Night Only aired in November 2021. It had 10 performances, including four songs from her most recent album 30, and an interview with Oprah Winfrey. Winston and Raj Kapoor, two of the special's executive producers, are also executive producers of the upcoming Grammy Awards, where Adele is expected to be a big player.

EGOT Status Is On The Way For Adele

Now Adele only needs to win a Tony to have all four major awards. She will be one of a small group of artists who have done this. There are only 17 people in the EGOT club, and Jennifer Hudson became the most recent member in June when she won a Tony award for producing the musical A Strange Loop.

There are more people in the EGOT club than just Rita Moreno from West Side Story, comedian Mel Brooks, actress Whoopi Goldberg, and singer John Legend. Adele has won several Grammys for her very popular albums, and her song "Skyfall" won the Best Original Song Academy Award in 2013.

Fans of the singer quickly noticed that she hasn't won a Tony Award yet, which would make her an EGOT since she's already won an Oscar and 15 Grammys. Adele: One Night Only, the special she just won, came out in November 2021.

It had 10 performances, including four songs from her most recent album, 30, and an interview with Oprah Winfrey in which the singer talked about both her personal and professional life. You can view her reaction to her Emmy win on her recent Instagram post.